Question : What is the largest country (in terms of land area as well as population) : 2161279

1) What is the largest country (in terms of land area as well as population) in the region encompassing the Oceania region?

B) a trendy neighborhood in Sydney, Australia

C) the many islands of the South Pacific

D) the name that Australians give to Tasmania

3) Which of the following is NOT located in Australia?

A) the Great Dividing Range

B) the Southern Alps

4) What land form dominates much of New Zealand?

5) What causes a tsunami?

A) an offshore earthquake

A) have a volcanic heritage

B) include the Marshall Islands, Tuvalu and Kiribati

C) usually result from the collision of two tectonic plates.

D) are built from coral reefs.

E) have no relationship to volcanoes.

7) An atoll typically has all of the following characteristics, EXCEPT

A) a lagoon in its center.

B) a high central peak.

8) What event sets off the process that creates an atoll?

9) Which of the following trio of factors influences the climates of New Zealand?

A) rivers, latitude and proximity to local mountain ranges

B) latitude, the moderating effects of the Pacific Ocean and proximity to local mountain ranges

C) rivers, latitude and the moderating effects of the Pacific Ocean

D) coral reefs, the moderating effects of the Pacific Ocean and rivers

10) What destroyed the Bikini Atoll?

A) a traditional missile

11) What type of animals are most closely associated with Australia?

A) dinosaurs (fossils, of course)

12) Which exotic animal, introduced in Australia, reached plague proportions, and was finally brought under control only after the purposeful introduction of a disease that affected only this particular introduced species?

13) Which part of the Australia/Oceania region receives the LEAST amount of precipitation? 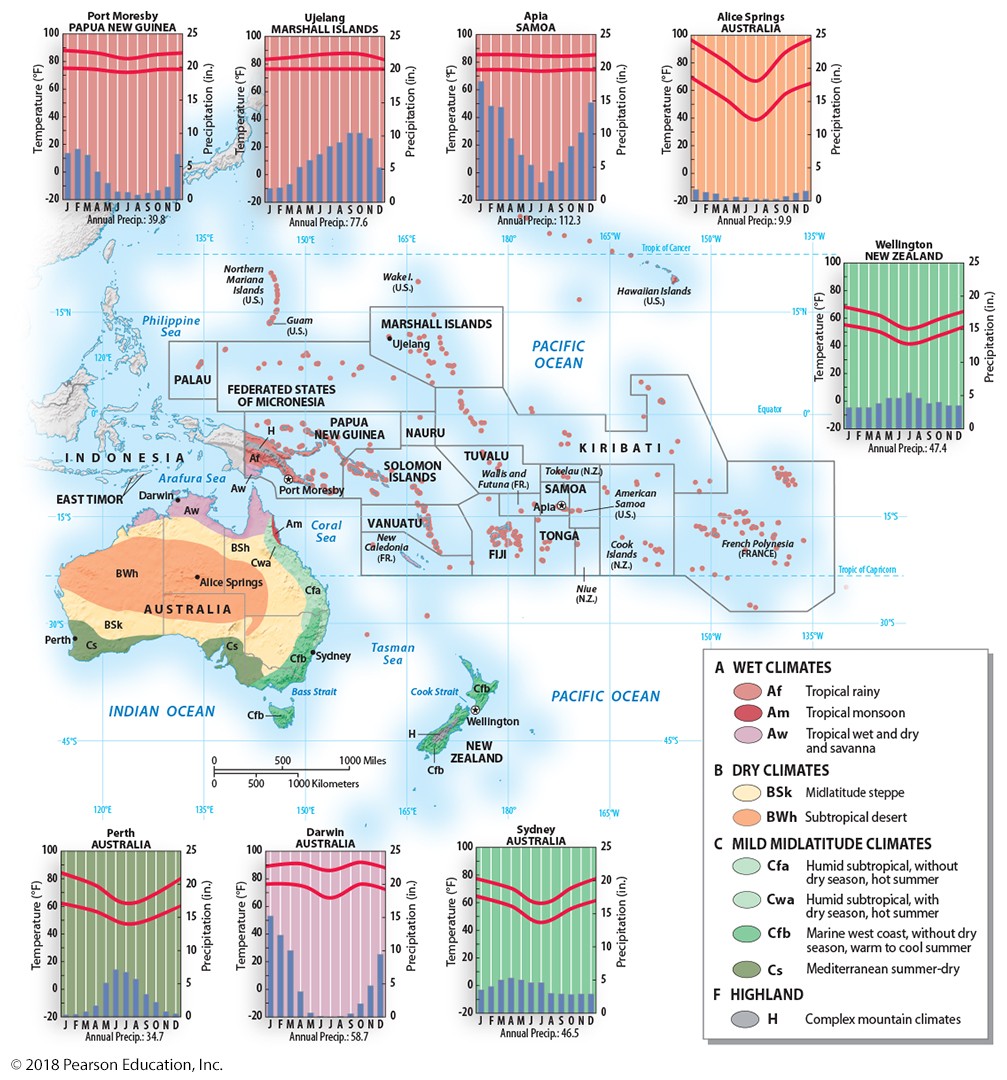 A) the mid-slopes of the 13,000-foot-plus volcanoes of the island of Hawaii

B) the interior of Australia

E) the largest of the Marshall Islands

14) What caused the dramatic decline in Guam's native bird species?

A) the elimination by humans of its food supply

C) the accidental introduction of the non-native brown tree snake

D) climatic change in the region

15) Which of the following areas of Australia/Oceania has NOT faced widespread environmental issues as a result of mining?

16) Where is the Great Barrier Reef located?

A) off the southwestern coast of Australia

B) off the northeastern coast of Australia

E) off the west coast of Australia

17) Tuvalu, Kiribati, and the Marshall Islands are already experiencing disastrous flooding related to global climate change. What has been the response of the people on these islands?

A) The islands have banded together into a strong political union lobbying for a global solution to climate change.

B) All three have instituted a policy of transmigration, encouraging citizens to move to the center of their island countries.

C) Scientists on these islands have worked together to build a highly advanced sea wall.

D) They have built polders patterned after those found in the Netherlands.

E) They have done nothing.

18) What is the approximate population of Australia?

19) The two largest cities in Australia are

A) Melbourne and Perth

B) Sydney and Melbourne

20) Which country in Australia and Oceania is one of the world's most densely populated?

Solved
Environmental science 8 Months Ago 132 Views
This Question has Been Answered!
View Solution