B) in the outer planets

C) in the Sun plus Jupiter

D) in the inner planets

3) Which observation supports the theory that the planets formed from a disk shaped nebula?

A) The rocky planets are close to the Sun.

B) The planets revolve around the Sun in approximately the same plane of the ecliptic.

C) The Sun is the center of the solar system.

D) Pluto and comets follow elliptical orbits that pass inside the orbit of Neptune.

4) Which of the following is not a Jovian planet?

5) What atmospheric gas is common in the outer planets but rare in the inner planets?

6) What is a popular theory for the difference in atmospheres of the Jovian planets versus terrestrial planets?

A) High temperatures and solar wind in the inner planets allowed most of the volatiles to be driven off the terrestrial planets, but not the Jovian planets.

B) The terrestrial planets are too cold to retain anything but heavy gases.

C) The Jovian planets trapped most of the comets which carried the gases.

D) The Jovian planets are just bigger, so they trap more gases.

7) Which of the following characterizes the history of impacts on Earth as deduced by impact history on other terrestrial planets?

A) Impact rates were very high in the early history of Earth, but dropped off after about the first 1 billion years of Earth history to a nearly constant rate since that time.

B) All major impacts occurred in the first 100 million years after the solar system formed.

C) Impacts continued at a fairly constant rate throughout the 4.5 billion year history of the solar system.

D) Impacts were more intense in the early history of Earth but have continued at about half the rate of bombardment since about 4.4 billion years ago.

9) Consider the below image of a crater on the Moon. 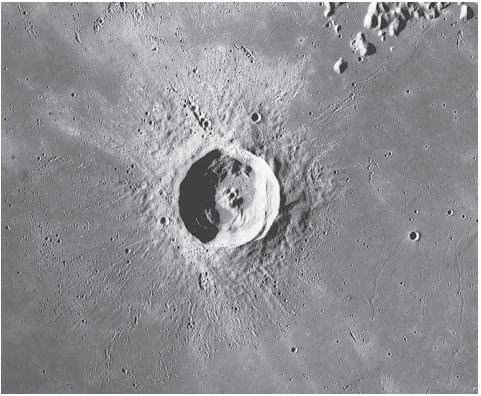 A) a much stronger atmosphere; is not covered with regolith

B) a much weaker atmosphere; is covered with regolith

C) a much weaker atmosphere; is not covered with regolith

D) a much stronger atmosphere; is covered with regolith

11) Which of these lunar features is the oldest?

A) the impact of meteoroids

Solved
Earth Science 2 Months Ago 34 Views
This Question has Been Answered!
View Solution

View Solution
Ask an Expert
Our Experts can answer your tough homework and study questions
5698 Earth Science Questions Answered!
Post a Question
Premium Member
Congrats! You are now a premium member.
Now You will bw able to access over 10+ Million
Enter your Details
I agree to the Terms and Privacy Policies