Login/Signup
x
Info
x
Warning
x
Danger
/
Homework Answers
/
Earth Science
/
According to the Ptolemaic (Greek) model of the universe, how many
Not my Question
Bookmark
Flag Content

Question : According to the Ptolemaic (Greek) model of the universe, how many : 2146891

1) According to the Ptolemaic (Greek) model of the universe, how many "heavenly" bodies could be observed wandering along the background of stars?

2) Why were planets called "wanderers" by early astronomers?

A) They move relative to the North Star, but not other stars.

B) They move in random paths across the sky due to their complex orbits around the Sun.

C) They move relative to the Moon because of their orbits around Earth.

D) They move relative to the stars.

5) Why do the planets "drift" east relative to the stars and then move west for periods of time?

A) They don't move, they stay fixed relative to the stars.

B) They are moving in the same rotation sense as the earth around the Sun, but as the earth moves faster (or slower, depending on the planet) the motion appears to be backwards.

C) They are moving in separate orbits around the Sun as it goes around the earth, producing the periodic backtracking.

D) They are moving in large elliptical orbits, so when observed from Earth, their motion changes depending on whether they are near or far from the Sun at a given time.

7) How did Eratosthenes estimate the size of Earth?

A) They didn't; everyone thought the world was flat until Columbus' time.

B) They measured the altitude of mountains in Greece, then used the distance they were lost from sight to estimate the curvature of Earth, which allowed estimation of the its size.

C) They used the height of sailing ships as they sailed over the horizon to estimate curvature of Earth, which allowed estimation of its size.

D) They measured the angle of the Sun above the horizon at midday in two places with different latitude and used the angle to estimate the circumference of Earth.

8) What is the modern explanation for "guest stars" that appear in the night sky and then disappear?

A) comets passing close to Earth

B) alignments of stars that make them suddenly appear bright

9) The earliest astronomical records appear to have been made by the ancient Chinese, Egyptians, and Babylonians in order to ________.

C) predict the best dates for traveling, particularly by boat, and where to build temples

10) Planets appear to move ________ each night, but occasionally they appear to stop and reverse direction.

11) When viewing the planets, Mars appears to move backwards, or retrograde, because ________.

A) it is rotating around the Sun faster than Earth's rotation

D) it is rotating around the Sun slower than Earth's rotation

12) What is the modern explanation for what the ancient Chinese called "guest stars"?

A) They are planets.

B) They are comets.

C) They are meteorites.

D) They are nova or supernova.

E) None of the above.

13) The Bayeux Tapestry is pictured here: 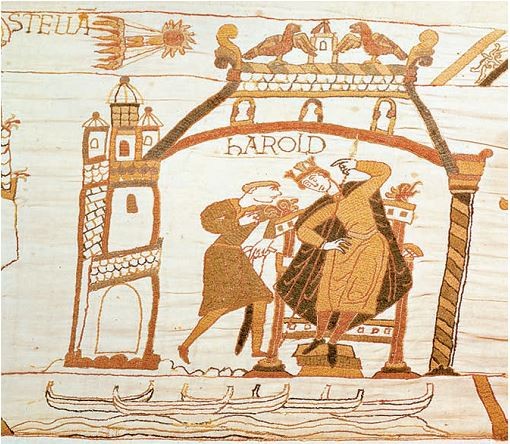 Which astronomical event is featured in this picture?

A) collapse of a nebula

C) the arrival of Haley's Comet

Solved
Earth Science 2 Months Ago 30 Views
This Question has Been Answered!
View Solution

View Solution
Ask an Expert
Our Experts can answer your tough homework and study questions
5698 Earth Science Questions Answered!
Post a Question
Premium Member
Congrats! You are now a premium member.
Now You will bw able to access over 10+ Million
Enter your Details
I agree to the Terms and Privacy Policies